skip to main | skip to sidebar

It appears some storm chase potential may set up from NW KS (perhaps NE CO along the Palmer Divide, as well) and southward along the dryline. This setup is ahead of a cut-off low developing over Baja California and an upper level jet streak entering the area later in the day. Because of the moderate westerly flow aloft, a low-level jet at 850 mb out of the south setting up and backed surface winds, the vertical wind shear profiles (including storm relative helicity) will be very favorable for supercells and isolated tornadoes. With a surface low in SE CO, if resolved correctly, a dryline bulge may appear just south of GLD as well. Surface dewpoints will be in the low 60s. With steep lapse rates, mixed layer CAPEs ~1500 J/kg result ahead of the dryline, extending around the surface low into eastern CO. However, a capping inversion (EML with warm temps at 850-700 mb) may be advecting in later in the day, increasing CIN. Additionally, it is unclear whether earlier convection predicted in the NAM may stabilize the warm and moist sector of interest. Therefore, initiation will be conditional on destabilization in clearing areas and must be caused by a sufficiently strong forcing mechanism. Any midlevel disturbance may help, dry line punch, although I suspect the Palmer Divide in eastern CO may be another interesting location for storm initation. Thus, I suspect potential target zones may extend as far south as the northern TX panhandle, and more likely into western KS/eastern CO.

C.R.
Posted by MESO Forecast Center at 9:25 AM No comments: 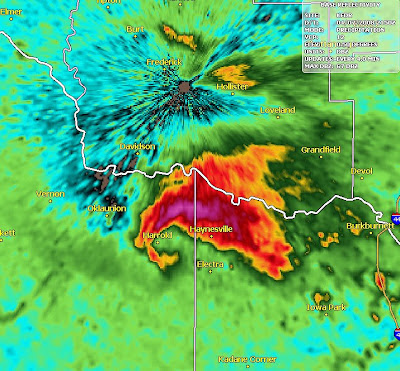 This is incredible...look at the hook on this baby!!!!
-Howell

Both NAM and GFS are in rough agreement on the synoptic situation on Tuesday. The upper level trough will continue to move eastward on Tuesday and the developing surface low will move through IL by the evening as it heads towards the northeast. A fairly broad warm sector, which will of course bypass Wisconsin, will cover IL/SE MO/AR/TN/KY/IN/etc by convective hour. To the southwest of this low, a cold front will be sweeping east-southeastward during the day. While the forcing and unidirectional wind profiles along much of the cold front would seem to favor a squall line, impressive SRH exists in the warm sector on Tuesday, especially northward toward the warm front and low, which may impinge upon the southern Chicago area by evening. If adequate sunshine exists in the northern part of the threat area, an interesting tornadic supercell threat may form tomorrow afternoon/evening. Further south, squall line will be likely mode, but again, shear will be strong enough for supercells and moisture quality will be even greater. Tough forecast for a chaser - I will look at the forecast in more detail after tonight's 00 Z runs to get a feeling on whether a southern or northern target is preferred.

Interesting setup is emerging in southern OK and northeastern TX this afternoon. Lee side troughing and a developing low pressure system forming over northeastern NM is setting the stage for a possible supercell event. A warm front currently extends across southern OK, with a dryline running south of CDS. Surface winds are southerly to backed in the warm sector. Rich Gulf moisture is beginning to creep into the region of interest as well. Here's the SPC RUC/observation-based mesoanalysis showing much of the situation at the surface.

Shear and instability are already sufficient for supercells, and even tornadoes, but these parameters will improve through the evening, especially as the low-level jet picks up this evening and the upper level trough moves in. 18 Z sounding, just north of the warm front shows an already impressive wind profile and nice lapse rates above 700 mb.

Supercells are likely to form along the northward moving warm front, and have good odds at being tornadic there. Other supercells may form along the N-S dryline. A no-brainer for local storm chasers today. 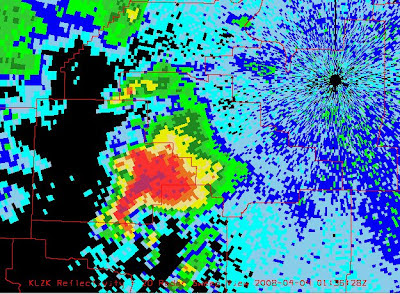 Here is a reflectivity image from LZK (little Rock) at 0136z. This is a mature supercell with a hook echo, inflow notch, and some intense rainfall. This tornado formed in a severe thunderstorm watch, but conditions were still potent enough for tornado formation. Here are some useful indicies I looked at where this tornado formed:

This supercell storm occurred as nocturnal cooling was beginning, but this goes to show that it doesnt take much for the atmosphere to work with what it has. Always look at the whole picture when trying to figure out whats going on. You dont have to have a tornado watch for tornadoes to form, as illustrated. Lets get ready for some supercells...the latest visible image shows some good TCU along the dryline telling us the cap is weakening and storms arent far off.
-Howell
Posted by MESO Forecast Center at 1:01 PM No comments: 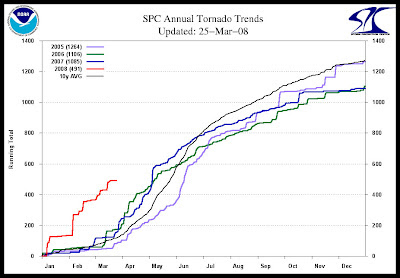 Found this interesting graph on the number of tornadoes that have occurred, comparing during the the last three years, compared to this year so far. The comparison is amazing. The trend is way above normal and significantly above the ten year average line. Click on the graph to see it full size.